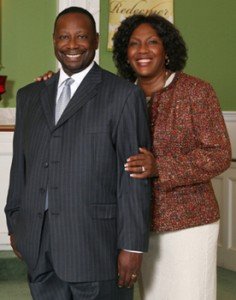 We are called to share the love of God to a lost and dying world. As we witness to others in the name of Jesus Christ through the power of the Holy Spirit lives are transformed. Sharing the good news of Jesus and offering the path of discipleship to others is my life work. I thank God for the opportunity to be a servant in His Kingdom.

Rev. Reggie Williams was born in Macon, GA to Willie and the late Cecelia Williams. He is the third of eight children. He has been married to Rev. Marcia Williams for 29 years and they have two adult daughters, Kristin and Gabrielle and three granddaughters.

In 1979, he accepted the call to preach the gospel. Having grown up in the African Methodist Episcopal (AME) Church, he preached his first sermon. He joined the United States Air Force trying to escape the call of God on his life and was assigned to Shaw Air Force Base, South Carolina. It was at Shaw, Pastor Williams’ heart began to burn for God. He met his wife Marcia in 1983 (also a member of the USAF). In 1984, he married Marcia and they began to have a home Bible Study in Sumter, while attending a church in Columbia. This Bible Study flourished and they saw many people commit their lives to God. He spent six years serving as Music Minister and subsequently Associate Pastor at an interracial church in Sumter, South Carolina and became a member of Evangel Fellowship International. He and Marcia co-founded Vision of Jesus in 1986 while he was employed by the Methodist Home for Children & Youth, serving as Human Resources Director and later as Information Technology Director. It was through this relationship with the Methodist Home that they, along with the church joined the United Methodist Church of the South Georgia Conference in 2005. A myriad of ministries and forums that focused on youth and young adult went out from Vision of Jesus.

His philosophy is that, “Believers should advance the kingdom of God and have fun doing it.”

Permanent link to this article: https://www.southcolumbusumc.com/about-the-pastor/